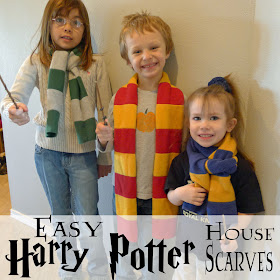 ***Update*** If you don't feel like sewing, I now have ready-made Hogwarts House Scarves available here in my shop.

I hadn't forgotten about posting the last few details from Katie's Harry Potter Party (click here for an overview).  I've just been hoping to get a few last pictures for a few of the posts and it's taken a while. 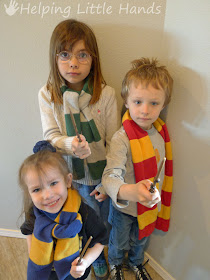 For instance, it's taken over a month for us to round up all three house scarves (one of them always seemed to be lost) and have all three kids in an agreeable mood for taking some pictures. 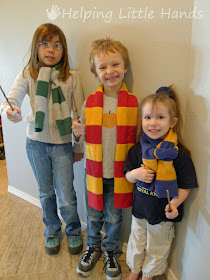 And even so, our member of Slytherin House nearly jinxed our representative from Gryffidor. 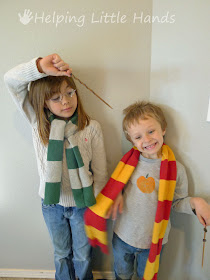 He was able to block her spell at the last second.  (You can see how we made the wands here.) 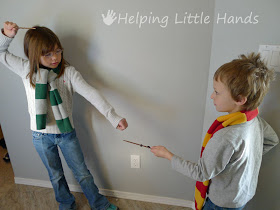 As one of our party favors we made house scarves for all the guests.  It also helped us keep track of which kids ended up in which houses.  A lot of the kids wore theirs for the whole party. 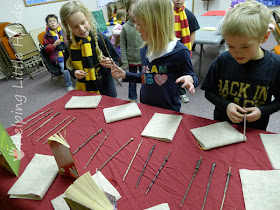 At Katie's party, we had all the kids get sorted into the different Hogwart's Houses.  (They wore a borrowed sorting hat and drew slips of paper telling them their house.) 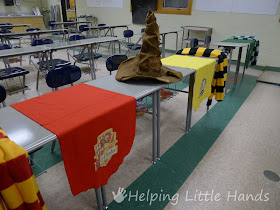 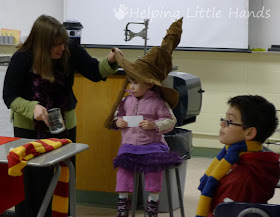 It just so happened that all three of my kids (Anson didn't participate) ended up in different houses, so they each got different scarves.  Slytherin's colors are green and silver.  Gryffindor's colors are red and gold.  Ravenclaw's colors are blue and bronze in the book, but blue and grey in the movie.  (We decided to stay more true to the books).  And Hufflepuff's colors are black and yellow...but we didn't have a Hufflepuff child in our house.  It should be noted that the scarves were changed in the later movies to be more maroon with wider bands of maroon and thinner bands of gold, but I thought these scarves with equal bands were more iconic...and much easier to make.

Since it's pretty cold here in January, they came in pretty useful.  Seth is definitely the child in our family who has used his the most...he wears it to school most days and also wears it to bed.

I know it looks like a lot of sewing and cutting, but they were actually really easy to make...and if you plan ahead and buy the fleece when it's 50% off, then they're really affordable.  Also, be sure to check the remnant bin too.  It's usually full of fleece remnants when fleece is on sale and at Jo-Anns you get 50% the current sale price on remnants, so I was able to get about half of the fleece for 75% off.

When you make the scarves, they basically come in sets of 2...so for two scarves, you'll need 1/4 yard of two different colors of fleece.  I needed 16 scarves, so I bought sets of 1/2 yard cuts for each type of scarf.  (Meaning for 16 scarves, I ended up needing 4 yards of fleece.)  Slytherin's colors are green and silver.  Gryffindor's colors are red and gold.  Ravenclaw's colors are blue and bronze in the book, but blue and grey in the movie.  Hufflepuff's colors are black and yellow.

I cut the fleece into 4" strips that were 18 inches long.  (If you're just making two scarves instead of 4, then you'll cut them into strips that are 4" by 9" long.)  Also, fleece comes 60 inches wide, so I folded it in half so that I could cut out two strips at once. 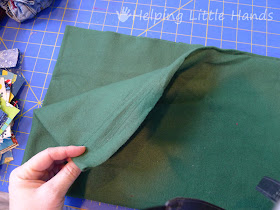 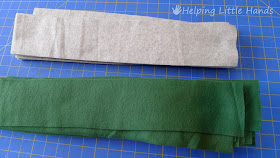 Divide your strips in half as it takes half of the strips sewn together to make the length of your scarf.  Sew the strips together so that the colors alternate.  (My ends were uneven because the green was a remnant that was a little longer than 18".  I just figured it was easier to trim it off later.)  I used a 1/4 inch seem. 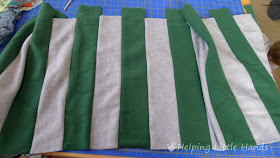 Trim the ends if necessary.  Then cut in half through the middle.  (Note these are folded in half on the right side of the picture.) 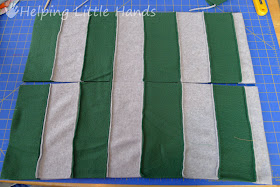 Fold in half "hot dog style". 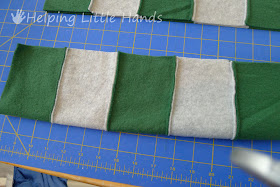 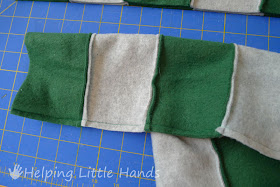 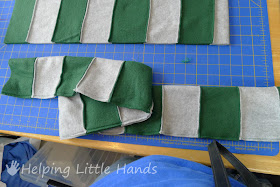 Now all that's left is to turn it right side out. 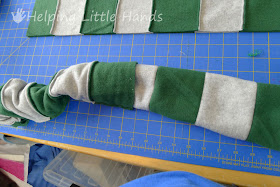 And you're done.  You could sew the ends closed, but I left them open, so the scarf is really one big tube. 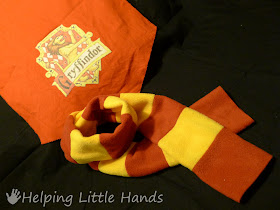 They were a huge hit with all the kids.  You can make them for each house or you could just make them all Gryffindor scarves since those seem to be everyone's favorite (and most recognizable as "Harry Potter.") 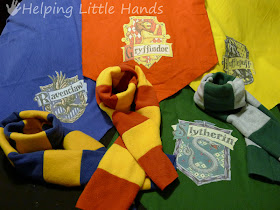 Of course if you're more of a yarn person, you can also crochet or knit a Harry Potter scarf.  I don't crochet well, but Katie's birthmom made her this beautiful crocheted scarf for Christmas...which she wore around a ton.  Now she can decide if she's feeling more like a Gryffidor or a Slytherin. 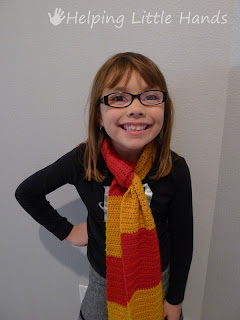 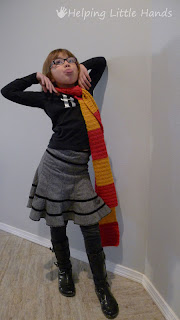 I have lots of Harry Potter inspired gifts and fun things in my shop.  The selection is always changing. 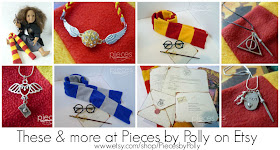 See these links for more details about other Harry Potter themed crafts we've done...and be sure to check back because I'll be adding more as I get them written up.

Please show my sponsors some love...

Thanks for taking the time to comment. I love hearing from you. I also love responding, so please make sure your Blogger account is set up for me to be able to see your email address or include your email address. I've had to stop accepting anonymous comments due to spam. If you don't have any other way to comment, you can always send an email.